Oh Hello! Has Anyone Seen Summer?

I came to the city to see if summer had perhaps become hung up on the shore of Lake Ontario and so hadn't made it to cottage country but it hasn't arrived in Toronto either and now we're into August where the nights get cooler(?!) and daytime heat generally looses(!?) a bit of the "intensity" of July! Seriously the only thing approaching warmth I've found up north this summer was in a 5'x7' washroom in a local restaurant that was actually being heated in July! 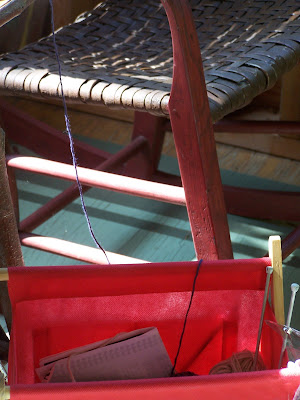 I'm at the point where I don't even feel good about saying "at least its good knitting weather!"! I'm sick of "good knitting weather"! I want some "too hot to knit" weather, I want it now and want about a month of it!!
Environment Canada says we really shouldn't count on any such thing happening though. GRRRRRRRR!
Craptastic weather aside, modest FO's were generated last week. I'll work on some posts for those once I get the laundry underway today. 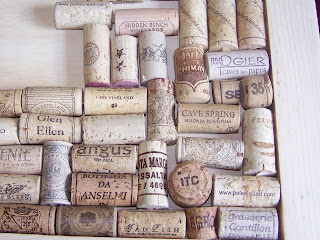 The Cork Board got "finished", covered in photos and hung on the wall. That's a WIP shot above, I'll get some FO pics of it for next week.
Berry Season has been fabulous both morning.. 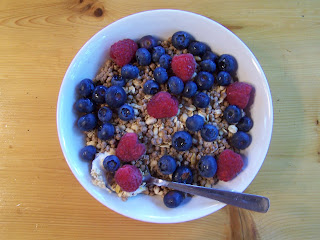 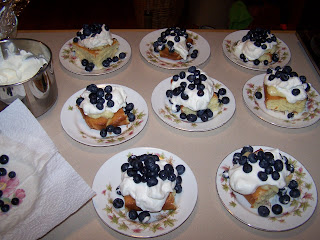 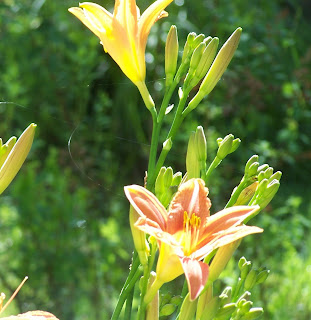 The Daylillies, having a heavy bloom load from all the rain yet being "Day" lillies only open a single blossom when sufficient sunlight makes it worth their while to do so, still have several days worth of blooming to go here in the first week of August when they are usually already done by mid July!
We've also noticed the Dragon Flies are growing very big this year ;)... 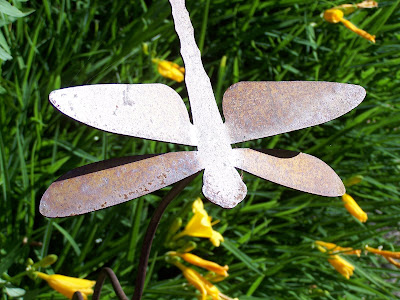 Anyway, today in Toronto is a sunny, if unseasonably cool day. While last night's soccer game wasn't a frigid affair for us spectators, (first time this season!) We did get drenched in rain during the final 10 minutes of the game and I understand there were a couple of big cloud bursts here earlier in the afternoon and there was also more rain over night so the gardens should at least be easy to weed.
I'm going to focus on the sunshine.
An FO post will be up here at Sel and Poivre tomorrow for sure! Thanks for dropping by and have a great day!
Posted by Sel and Poivre at 00:33

I'm heading to the cottage next week. I'm SO crossing my fingers there will be sunshine. Lord knows I'll still bring too much knitting...

Sorry to hear you haven't gotten warm summer temps...yet. I'd be happy to share some hot weather if I could...it's been really hot here for weeks...over 100f just about everyday. We're a little tired of the heat. lol Some summer rain and cooler temps would be very welcome here right about now. :-)

Those berries and cake look so yummy and so pretty!

Sigh - I'm in T.O too and I want summer! I'm taking some vacation time in September so hopefully summer might arrive then!? I'm really looking forward to seeing your FO's, including the wine cork board. Lovely idea!

Hmm. You know, if there were no summer, it would make more sense for all the summer knitting - cardigans and tank tops and things. I never ever knit those because I hardly wear anything other than a t-shirt and shorts in summer, even if it's in the 70s (25-28C?). But I know how frustrating it would be without heat. I love being hot.

I'm heading to the cottage this weekend for a week, and it damn well better be HOT! I am sick of the autumn weather we have been having - too many clouds, too much rain, too much cold. Really, this is just wrong...