More than a Bunch of Flowers

Our Wedding Anniversary was last week. The thoughtful tributes I received included a big bouquet of colourful blooms.  They were lovely from the moment I opened the box but over the past week the blossoms have aged and become so much more interesting and impressive than when they were fresh and new... 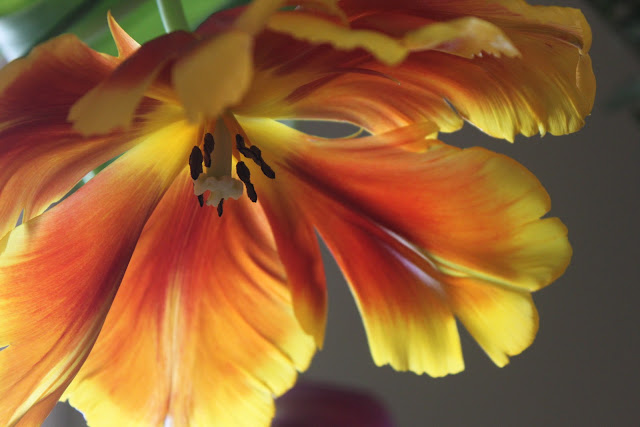 These open blooms emit a sweet scent that hangs heavily in the air, drifting throughout the house. Guests  over the last few days have commented how the aroma makes the house feel soooo good. 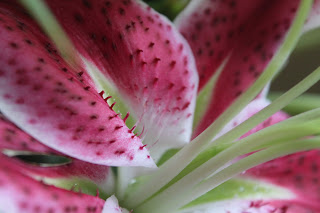 To me, its all aptly reminiscent of how great we are together 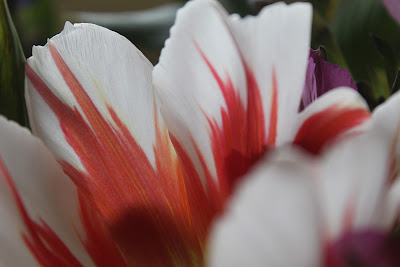 My vision for this was very similar to the "Aimee Pull" of the Mission Falls ads. (No dropped shoulders though...I have enough stuff visibly "drooping" I don't need to optically enhance that impression with sweater construction!) 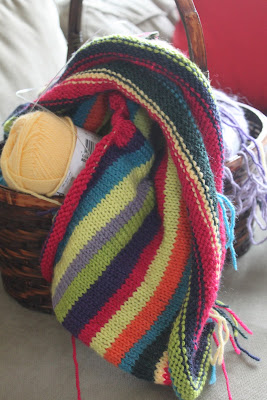 Anyway I knit a gauge swatch for this worsted on 6.5mm needles and calculated my pattern details using the set of very accurate measurements of my body generated in the two classes I took last spring on knitting for proper fit. 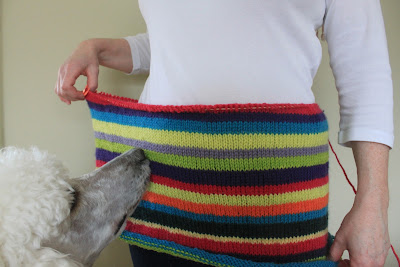 It would seem, however, that with the addition of a creamy white "photo assistant" to my life and the hours of brisk walking and hiking he requires each week, those measurements have become a bit inaccurate. I was going for an inch or so of positive ease... 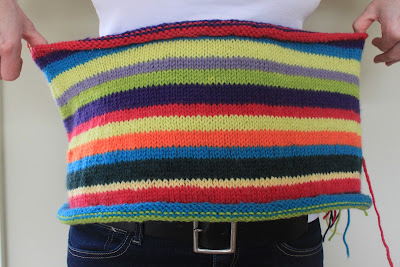 Instead I've got closer to about 7".  I have not shrunk 6", there is some of that magical "why didn't the whole swatch thing work out here?" that seems to so often creep into my knitting life too but I definitely have to put together a new set of measurement data.
I have also received some helpful "feedback" from Darling Daughter that my colour choices are yielding something closer to a clown costume than an adult sweater. She has recommended I ditch the pink, orange and forest green from the palette to focus on the colours below... 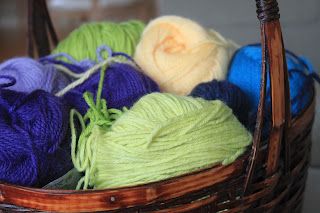 If anyone is looking for me just tell them, right after I walk the dog I'll be back at the drawing board!
Thanks for dropping by!
Posted by Sel and Poivre at 22:26 9 comments:

I Am Not a Canadian who's excited about the weather turning warmer...

When the snow melts and the ground becomes soft a 90 minute walk Saturday morning yields not only a healthy glow to the rest of the day but also this... 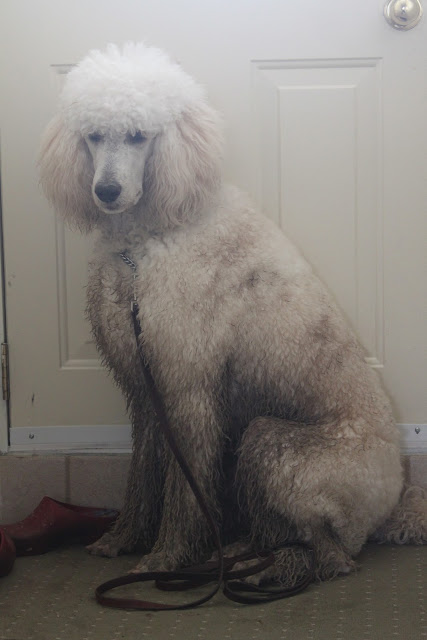 Which requires 30 minutes in the shower... 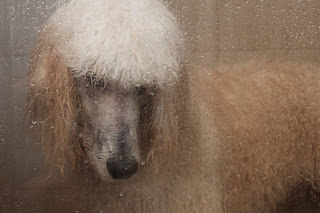 One hour fluff drying (Shop Vac set to "blow")Followed by 40 minutes or so of brushing out mats and just like that... 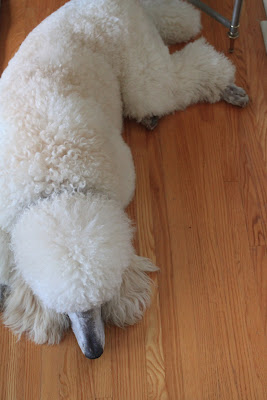 We have a clean creamy white poodle patiently waiting and ready to go for the afternoon walk! 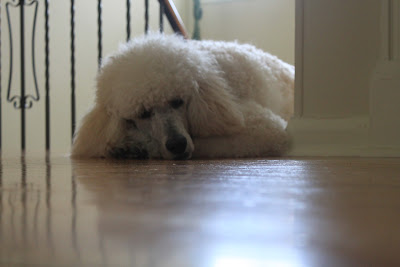 I need to find a mud free route while things dry up a bit around here!
Posted by Sel and Poivre at 22:21 5 comments: 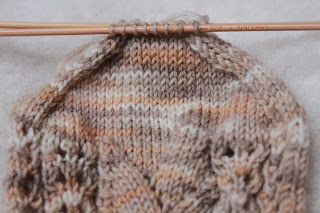 With sock number one done late last week I felt certain the pair would see completion by the end of the month. Unfortunately sock two has been a case of the proverbial two rows forward, three rows tinked back. My classic error of feeling smug and on top of things, having my mind wander off somewhere and then re-engaging to find I have no idea where exactly I am other than (once again) in trouble!

I'm not the only one with a wandering mind though. Hudson's brain is all over the place these days and its costing as much additional effort to overcome as my silly knitting errors. Now in the final week of our first set of Pre Novice Obedience lessons, getting him to respond to commands is 10% of the challenge. Doing so in the presence of distractions takes 90% of the effort. 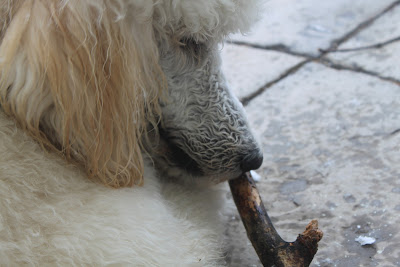 Hudson's "distractions" currently include things like twigs on the ground, people across the street, the need to "read" with his nose every lamp post and hydrant along our route, speeding traffic or it could be the scent of a bitch in season a couple of miles up wind!

Obviously the issue with the alluring scents of females will only be resolved with neutering but otherwise I'm managing the rest by trying to understand our training environment from his perspective. I need to take advantage of the learning opportunities these challenges present...
Early Saturday after a Friday night snowfall we headed to a nearby riverside where I hoped lots of people would be out enjoying the lovely white scene. Every time someone approached I had him heel and sit and wait while they passed.  If they showed interest I would invite them to pat him.  For his part, he needed to stay sitting for the duration. By the end of the 2 hour hike he was coming back to me when he saw someone up ahead. He enjoyed all the interactions and  it was great to see a bit of success for my efforts!

At last night's class two intact (un-neutered) males had a bit of a "discussion" just before class started. The doggy testosterone that must have filled that gymnasium kept Hudson, as well as the other male pups distracted until the dying minutes of the session. By the end Hudson managed to pull it back together so despite it being a 45 minute ordeal of a wrestling match between the two of us I have to think of it as an ultimately successful exercise.
I had to adopt a similar outlook when I got home from class and went to work on the socks...I may be tinking as much or more than I'm knitting but I'm sure going to love these when they're done! 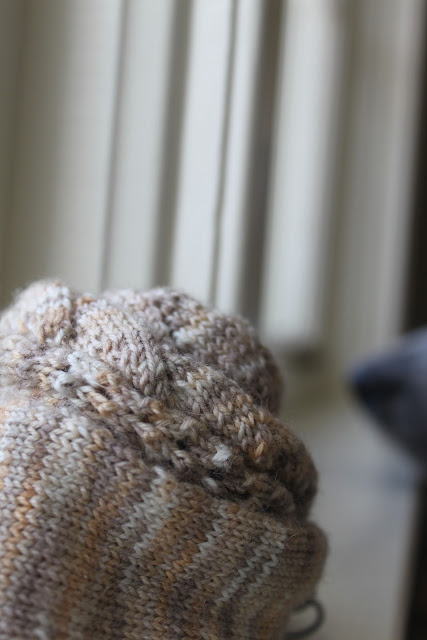 Yes that nose in the background is my "helpful assistant". I'm not sure how I got any photos organized for posting before I had such a great helper!
Thanks for dropping by!
Posted by Sel and Poivre at 14:24 6 comments: