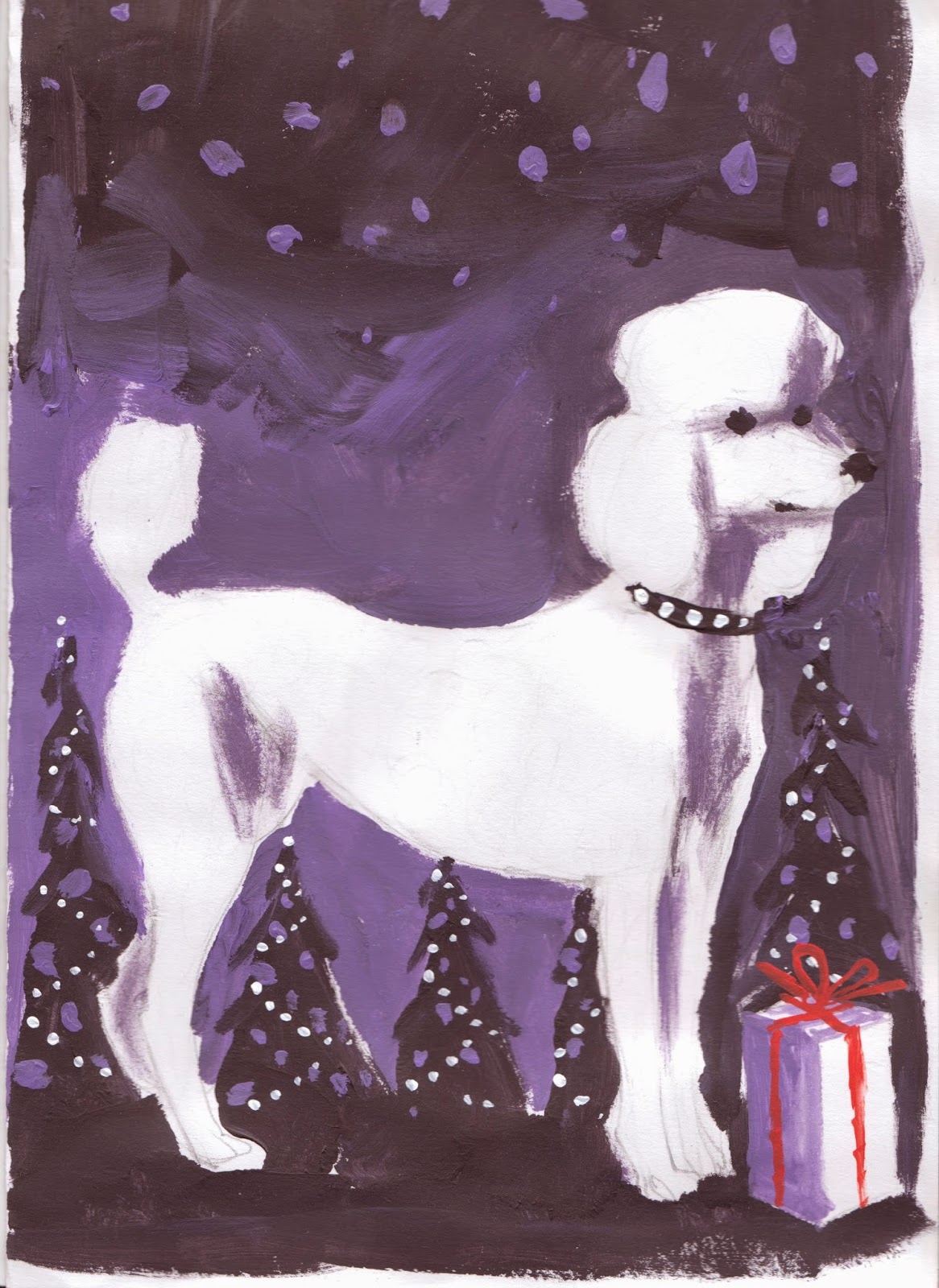 This week I'm continuing to strive for a "Chill" Christmas with the help and "oversight" of our in-house Christmas "Angel".

He's incapable of malice, ever sweet and loving, ("dresses" in "white"!) and keeps me mindful of what really matters...being together, enjoying our dinner (even if its kibble!) and whatever's on that To Do List and no matter the weather, making sure we get out and enjoy a big long walk twice every day!

Appreciating the food we are lucky to be able to enjoy and making sure to get our exercise are fairly straightforward if sometimes elusive goals over the Holidays.

"Together" can be a little more tricky. "Together" needn't only mean those we can see and touch. After all traditions and their place in our memories are a big part of feeling together but are naturally crammed with people and events that once defined the season for us but that, for whatever reason, are no more. So I feel I need to focus on a broader sense of what "Together" might mean right now.

For example, its not that its only the four of us for Christmas. Rather this year "Together" means Number One Son is home from England and we have him all to ourselves on the 25th.

Together is also manifesting itself in opening up the Christmas preparations to my 20-something compatriots - both in how they can help me and how I can help them. (And of course there are the mittens I got the go-ahead to make!)

Today all my finished knits are soaking together pre-blocking - I'll post about those next week!)

On the 26th at my in law's big family bash, "together" will include someone new "attending" within their mother's belly. We won't be able to see or hold that wee little one but they'll hear us and sense pregnant mom's feelings about the whole thing!

And we'll be "Together" with my family most recently in our memories of last year in Manhattan. On Christmas Eve, while we were there the safe arrival of miraculous identical twins (now happy one year olds) occurred.  Their existence defied parental age, injury and cancer, their gestation overcame extremely high risks and they handily overcame the challenges of prematurity to expand my close Cousin's offspring from 3 to 5 in one big jump. (Hudson artwork featured above courtesy of same Cousin!)

So the idea of "together", in all its various manifestations, is my particular focus this week. If I loose sight of it in the melee of my mind Hudson's contented sighs from the floor between us is a potent reminder.

I hope this next week is wonderful for you - wherever you are and whoever you are with or remembering!
Posted by Sel and Poivre at 13:22 1 comment: Links to this post

Right on the Money

A typically jam crammed time chez Sel and Poivre has been the nature of our December but I'm hitting my marks and staying "Chill". It feels great.

Christmas knitting is going pretty well - hit a bit of a snag working decreases on the fly on a pattern that hasn't any while simultaneously watching a gripping BBC thriller PVR'd last summer. 'Serves me right. Fourth time was "the charm" for sorting it out! Now I'm awaiting some sizing information - being collected on the sly for me before I'll finish that project off.

Another Christmas knit for a certain picky recipient has been knit to a point where I've stopped, ready to package it up. Once opened by said recipient I'll get the final go ahead for size before finishing it off. (Using a new to me yarn for this - very interesting - can't wait to blog about it.)

The last of my gift projects almost sprang from my needles last night to the point of being half done in shorter time than I'd anticipated.

Cast on during my subway ride down to the Toronto Knitter's Guild (DKC has a new name) meeting. The presentation was largely a straight up information session answering questions Guild members had submitted ahead of time. Responses were prepared and quite exhaustive with the new Executive all sitting on stage. Not exactly exciting but nonetheless thrilling to have clarity and a commitment to future transparency. We are very lucky to have a new President who will bring her legal background to organizing the Guild for future growth and stability. But that's not all!

There's a bubbly new Program Coordinator who will be managing Show and Tell from now on and she put together a fantastic spread for the Holiday gathering that followed the business part of the meeting. There's a new newsletter team, a new webmaster and yet another member newly committed to overseeing/managing the Guild's social media presence.

I saw lots of new faces in the crowd and would describe the mood in the room during Show and Tell as "giddy". Lots of energy there and a sense of genuine interest in the new initiatives going forward. It was also a nice surprise to meet one of my Ravelry friends in person and make another to boot!

While some familiar faces were absent once back in our usual "home" next month I hope they'll return to be as inspired by the positive "vibe"  as I was.

I came home all ready to finish off the Christmas knits and finish up Hawser too. ('Got a bit carried away a few nights ago and went 4" beyond where I should have stopped on sleeve one. Again, have to blame the BBC!) I'd like to wear Christmassy red on the 26th at My Beloved's family Christmas celebration.

I can't fail to also mention how much I'm enjoying reading about Brenda's exploits with knitted gift giving in recent days and Stephen's triumphant completion of an EZ pullover he's packed up to wear abroad over the holidays and some fantastic hats he's taking along as gifts as well. Needles also sounds like she is enjoying working up Alpaca scarves for the "Bobs".

While I don't always read the Yarn Harlot I've also been scanning her pre-Christmas posts and finding inspiration there too.

Our snow cover has melted over the last few warm rainy days and nights. The rain's kept us from our annual family trek to get a tree. Just what the four of us are doing/eating on the 25th - our first ever Christmas without extended family - is TBD but I credit the knitting (and the reading about it) and last night's festivities for feeling the spirit of the season this morning.

I hope you're feeling it too - whatever your "season" entails. Thanks for dropping by!
Posted by Sel and Poivre at 21:05 3 comments: Links to this post

I've been working away on Hawser and only Hawser and loving the continuity of the process with no distractions and no particular pressure either.

I'll finish the body over the weekend and then just have stockinette sleeves in the round to be able to pick up and work any time. Lovely!

I've developed a bit of a Christmas gift knitting list - small things that will work up quickly and be fun and gratifying but I need to hit Romni and Eweknit before I can start any of them.

I can't squeeze a trip to either of those spots in before next week so for now its just ruby red Hawser to enjoy through the long dark evenings. There's something that feels so right about cold weather, darkness and knitting when they're all together.

The weather for walks with Hudson has ranged between brisk and bitter but layered cowls and scarves have blocked the wind 'round my neck while the wool layer under my coat keeps the chill at bay. Back at home it feels fantastic to have exercised out in that cold fresh air.

My mitten collection grew a lot over the last year but I find myself imagining more effective designs to keep the achey cold from my fingers.

There's a new baby expected among my in-laws early in the new year so I'm scheming for that as well.

With projects "current", "soon-to-be" and "what might I feel like doing after that?" my proverbial "knitting basket" is a very comfortable place to "be" these days!

I'm just "over" being frantic about the Holidays. Nor am I interested in setting arbitrary deadlines for myself or exhaustively working lists. I've no little souls for whom I must demonstrate the magic of the season nor aging/failing elders watching to see I'll carry the proverbial "torch" forward. Been there, done that, will likely get there again and anyway by this point I can do that in my sleep.

Right now, Beloved and kids are most interested in "happy" and "calm" in a comfortable festive context, some seasonal treats and a willingness to let the kids go about their own celebrations of the season as they choose (at the last moment of course but such is the "beauty" of their digital lives.)

Meanwhile my Beloved and I have a PVR full of fantastic (mostly BBC programs - the beauty of our digital lives!) to enjoy with a big creamy poodle at our feet in front of the fire.

Now I must confess, this "picture" is not what you would see if you were actually to take a peek into my days and evenings of late or of events on the immediate horizon but its where I'm focused. The rest is peripheral. At least that's my story and I'm sticking to it!